Treasure Chest is an item that can be opened for treasure loot, and more important, orbs. Solving the riddle written in a Treasure Map will lead to a treasure chest. Unlike maps, it's possible to have multiple chests at a time.

There are three different types of chests: Regular chests, Green Chests and Red Chests. Green chests give better loot and better chance to get Green Orbs than normal. This is the same with Red chests.

After receiving the Runite Spyglass as reward from the Pirate's Treasure quest, the pirates start looking for Green Treasure Map, in additional to normal Treasure Map. The green version leads to Green Treasure Chest, which gives better loot and far better chance to get Green Orbs than the normal chest.

Similarly, the Pirate Ship is required for the pirates to start looking for Red Treasure Map, in additional to normal and green Treasure Map.

Chests can be opened with keys. Players can either buy a key with a fee, or craft one with a certain crafting level requirement. Normal chests use keys made from Gold Bars, green chest use Promethium Bars and red chests use Runite Bars. Socketing a gem into the key will get extra chest loot roll slots, depending on the gem.

A Blood Key however, will always open a chest with four slots: three random orbs of each type (blue, green, red) and an Empty Orb with the same color of the chest. Pirate Potions are not required to be able to get this empty orb. Using a blood key to open a chest will not consume the chest for which the key has been used, but it will consume the key.

Notes: the amount is the number of single items one can get per one chest slot.

The amount of item per slot is unconfirmed and estimated from data collection.

A chest which was opened with an Emerald key 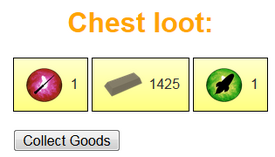 A chest which was opened with an Emerald Key 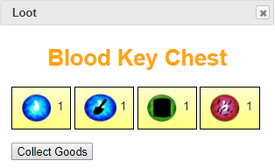 A chest which was opened with a Blood key 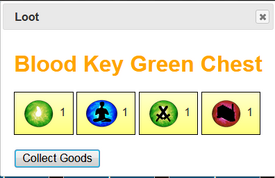 A green chest which was opened with a Blood key

Blood Key Red Chest
Add a photo to this gallery
Retrieved from "https://diamondhuntonline.fandom.com/wiki/Treasure_Chest?oldid=12660"
Community content is available under CC-BY-SA unless otherwise noted.