Monsters in game don't have an official name, but rather have a code name: Npc1, Npc2 and so on. The community however gives them several friendly names, the chicken-like monster for example is usually called Chicken. Certain monsters can only be found in certain areas, with an equal randomly generated chance.

A normal monster has similar stats to hero, except for Magic Bonus. They always drop a loot bag upon death.

Shiny monsters are a rare version of normal monsters, which have a 1/300 chance to be encountered. The shiny loot bag gives 10 times the normal loot.

Undead monsters are susceptible to scythe. Using the scythe against them will deal double damage and ignore 50% of their defense.

Some monster can cast certain spells or use special abilities. There are two kinds of abilities: healing and transforming.

All healing monsters use the same heal mechanic: for each attack, they also heal randomly from 0 to X HP. The faster a monster attacks, the faster it heals. However if one heals for 0, there won't be a visual effect of healing.

Faradox's Guardian transforms into a more powerful version after being defeated.

There are various possible items that can be found in a loot bag, depending on the monster. Most monsters have a certain chance to drop Treasure Map, Chisel and Fishing Bait. Some items will always drop, some will occasionally, depending on their rarity.

The Easy achievement perk gives a 5% chance of getting two loot bags. The tomb monsters in Faradox's Tombs don't drop the regular loot bags, thus are unaffected by this perk. 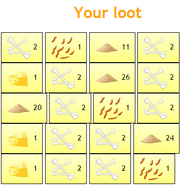 Add a photo to this gallery

Retrieved from "https://diamondhuntonline.fandom.com/wiki/Monsters?oldid=12287"
Community content is available under CC-BY-SA unless otherwise noted.